MicroPort Scientific Corporation can trace its origin back to 1998 to a small office at ZJ Hi-Tech Park, Shanghai China where a group of dedicated individuals joined together with a common belief that advancements in medical technology could transform and enhance the patients' well-being not just in China but globally. During the past decades, the pioneers of MicroPort® have devoted themselves to this mission of advancing the forefront of technology innovation to develop the best and most affordable medical therapies to treat patients around the globe.

Through years of growth and innovation, MicroPort® has become a premier medical solution provider covering 10 major medical disciplines including interventional cardiology, orthopedics, interventional radiology, electrophysiology, diabetes and endocrine management, surgical management, and others. With over 200 products currently approved for use in over 5,000 hospitals worldwide, MicroPort® is contributing to a better world through its life-saving medical therapies and quality-improving care devices being used in patients every 15 seconds.

With a large global footprint of R&D and manufacturing facilities (Shanghai, Jiangsu, Zhejiang, Beijing, Shenzhen in China, and Memphis, TN in the United States), a strong focus on technology innovation with over 1,800 issued patents, and a global workforce of over 3,000 employees, MicroPort® is committed to its vision of being a patient oriented company capable of leading the future of minimally invasive healthcare and other emerging technologies.

EVOLUTION™ Medial-Pivot Knee System
The Evolution™ Medial-Pivot Knee System was designed based on the success of the ADVANCE® Medial-Pivot Total Knee, which was launched in 1998. The ADVANCE® Medial-Pivot Knee was one of the first total knee implants designed based on modern studies which showed that the medial compartment of the knee moves less than the lateral compartment. All of MicroPort Medial-Pivot total knee implants feature ball-in-socket articulation which enhances stability and allows the prosthesis to move and feel more like a normal knee. Traditional knee implants slide anteriorly (commonly referred to as paradoxical motion), due to tibiofemoral incongruity and a loss of stabilizing structures after total knee replacement. In addition, paradoxical motion seen in traditional total knees may cause a patient’s knee to feel less stable and exhibit more noise. On average, nearly 20% of patients are unhappy with their total knee replacement. According to the literature, the leading causes of dissatisfaction are residual pain, functional issues, and early implant failure. The Evolution™ Medial Pivot Knee System aims to answer these traditional implant limitations, by providing an implant that delivers flexion stability, anatomic motion and wear limiting design.
Features 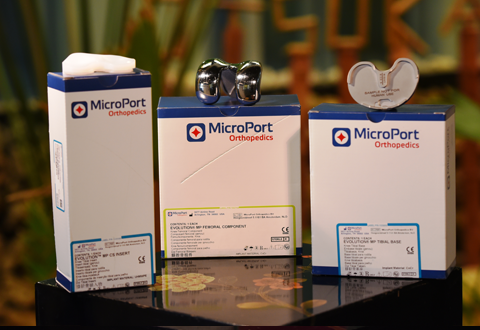